At the beginning of the corona crisis, as we were all adapting to remote working, I wondered whether people still gossiped from their home offices. As time went by, I noticed that new etiquettes and codes started to emerge. Employees gained a better grasp of the technology, and many began to pay more attention to their backgrounds, by cleaning them, blurring them, or by choosing one of the available templates, like a sunny beach resort, to cover up the mess in their home offices (and thereby giving us less to gossip about). The online platforms also improved, so more attendees can now be seen on screen at the same time. We can raise a little hand when we have something to say, so we don’t speak on top of each other anymore. We became better at making eye contact.

During an online focus group that I held with a few researchers and lecturers, I asked whether they still gossiped, or gossiped differently, in this new digital era. 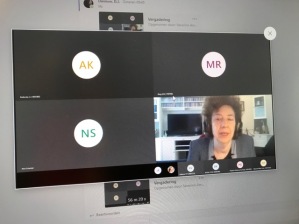 When we split up into smaller groups on the Teams chat, one of the researchers, Tony (45), started talking about the online behavior of one of his co-workers, another researcher also taking part in the focus group: “Cindy seems to make good use of the fact that she’s being watched as she chooses to leave her camera on. Even when she’s doing other things, such as grabbing a book during a meeting. It’s like, she wants to say: ‘look, I’m getting bored here.’ I also see her on her phone quite a bit, and suddenly she and a couple of people in the meeting start to laugh. Cindy could, after all, send messages on WhatsApp discretely under the table, outside of the camera shot. But I suspect Cindy is doing this as a performance, or as a sort of provocation.”

“Maybe Cindy is still a bit clumsy with the technology, and simply forgot to turn off her camera?” I suggest.

But Tony is certain that’s not the reason. Since we’ve passed this first phase of getting used to the technology, it surely must be provocation.

When we came back to the larger meeting with all participants present, Tony raised the question about Cindy’s online behavior and confronted her in front of the group. “Some people choose to have neutral or artificial backgrounds. But Cindy chooses to keep her hands visible, within the frame. You can really see it when she grabs her phone or reads a book when someone else is talking. So, I wonder, is she simply naive or is she doing this with intent?”

Cindy seemed a little surprised by Tony’s comments. “I don’t work in an organisation so I follow other rules,” she explained. “If my daughter calls me, I always answer the phone. People think that’s impolite, but I think it’s really OK. I find that this is normal behavior.”

Daan (32), another participant, believes that Cindy’s performance may come across as a provocation, because in real life, people can’t change the way they are seen by others. What you see is what you get. A colleague in a physical meeting can’t hide that he is on his phone. But in the virtual world, people have control over what they choose to show, and can hide the fact that they are on their phones. “I can’t change the way I see you. Only you can change that. You have control over my eye, basically,” Daan observes.

In a reflective essay about the digital, corona organisation, Thijs Homan, a professor of change management at the Open University in The Netherlands, notes that, in such online settings, two forms of communication have emerged. On one hand, during a digital meeting, participants are on-stage. Everyone in the meeting can see and hear them if they turn on their cameras and mics, and talk. 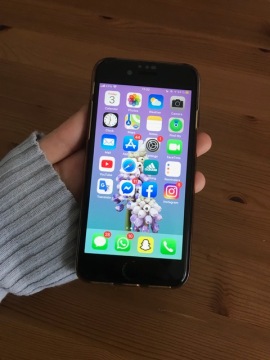 Parallel to such on-stage meetings, another communication channel has cropped up on the side. Most of the times, during many Zoom meetings, since our cameras and microphones are turned off, (and our faces do not appear on the main screens), we have the leisure to do something else at the same time. Therefore, other types of informal conversations, or off-stage meetings often take place via WhatsApp or by phone (if your mic is on mute). This is where we share with smaller groups what we really think. “The chair has no clue what he’s talking about,” for example. Or all of the other things that we think but that we would never say in a formal meeting, or on-stage.

Such off-stage meetings, I suspect, are making the coffee machine obsolete. They have now become the platforms where people gossip, where alliances are formed, where in-groups are created via WhatsApp and where others are excluded.

However, the rules of behavior in such off-stage meetings are quite different than those by the water cooler. In person, you generally know how to behave. You know what to share or not to share. You pick up signals from your listener’s body language: I’ll shut up, because she doesn’t think I’m funny. You see that you’re boring a colleague when he takes a quick glance at his watch.

Homan calls these ‘local somethings,’ something very specific that develops between people, an experience with someone “that is at once very stable and that changes constantly.” These local somethings, after a while, develop into moral compasses and instruction manuals on how to interact with various people.

This type of context is sorely missing online, whether we are off-stage, on WhatsApp, or on-stage, in a larger Zoom meeting.

Joop (33), works as a researcher in a health care institution. “If you’re having a disagreement in person, it’s quite different when you’re online,” he explains. “It’s difficult to make eye contact online. So, it’s very uncomfortable to disagree on camera. When you disagree in person, you can read the other’s body language. But when someone’s a bit pissed off online, it’s quite difficult… because I can’t see the rest of your body, I can’t see what you’re doing with your hands… That’s why I constantly come back to a neutral ground, where I agree with the person, because it feels almost inappropriate to disagree through the webcam.”

Joop admits that because of these feelings, it is more tempting to revert to gossip rather than to confront a colleague directly.

However, there is a lot more at stake when gossiping off-stage. Hubert (52), who works for a Dutch governmental organisation, claims to be a lot more careful when gossiping online. “During our large Teams meetings, we often do communicate via WhatsApp in smaller groups. Of course, we send each other some critical comments. But I am a lot more guarded on WhatsApp than I would be if I were talking to these colleagues face to face. When you put things down in writing, you never know where they can end up. Maybe one of the colleagues in the group has a hidden agenda or wants to prove his point to the management team. When you say something verbally, you can always deny it. But you can’t if it’s in writing.”

As lockdown and restrictions are easing up, I wonder whether we will carry certain of our online habits over to our physical meetings in the future. Hubert describes his first live meeting with colleagues. “It was strange, because we were all siting 1.5 meters apart. Normally, if I don’t agree with someone, I might have whispered something to the colleague sitting next to me. We can’t do this now, as it would be very obvious, so we’re still using WhatsApp to send messages if we want to gossip about someone.”

As lockdown and restrictions are easing up, I wonder whether we will carry certain of our online habits over to our physical meetings in the future. Hubert describes his first live meeting with colleagues. “It was strange, because we were all siting 1.5 meters apart. Normally, if I don’t agree with someone, I might have whispered something to the colleague sitting next to me. We can’t do this now, as it would be very obvious, so we’re still using WhatsApp to send messages if we want to gossip about someone.”